I was standing on the front hill at 8 am looking toward the east. The deck of low stratocumulus was pushing in from the south while higher altocumulus was nearly stationary awaiting the sun to burn through it. It was a dark morning after the supercells of the previous day but it promised to be hot and muggy and much sunnier by noon. The energy was still around for more thunderstorms and there was still a lot of veering wind shear associated with the upper low to the northwest. I only had a couple of hours to paint this rather dark dawn to a new day which promised to be full of thunderstorms again. It was sunny by the time I finished.
Posted by The Art of Phil Chadwick at 8:57 AM No comments:

This is an example of a channeled, classic jet stream and the associated cirrus cloud. The jet stream is on the northern or cold side of the cirrus cloud. The axis of maximum winds is pretty straight or "channeled" in these situation. The jet maximum core is probably just at the leading edge of the thickest cirrus associated with the jet stream. For me, this meant that the jet stream was directly overhead and just outside of the painting. The clouds can tell you a story if you know the vocabulary. It is Greek to most people these days but the rural population of early Canada understood.
There is a patch of altocumulus floccus in the right entrance of the upper jet and this is consistent with the earlier diagnosis. The floccus type cloud tells us that the warm air mass south of the jet stream is quite unstable but pretty dry as well. Nothing bad is going to happen at least for a while.
Posted by The Art of Phil Chadwick at 9:25 AM No comments: 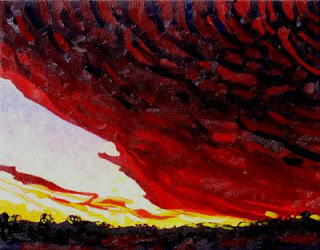 A warm conveyor belt associated with an approaching low pressure area was pushing northward across the Oak Ridges Moraine. Low level moisture moving with the flow was still dark while the sun illuminated the higher level sky. This low level cloud will dissipate quickly under the August sun but at dawn it looked really dark and dangerous. It wasn't but you really have to be a meteorologist or an experienced weather keener to figure it out. This sky meant that southern Ontario would get into the hot and humid weather again until the next cold front came along with thunderstorms. The cumulonimbus arrived just after I finished the painting the next day.
Note that the next day was Thursday August 20th and the tornadic supercell outbreak across Southern Ontario....
Posted by The Art of Phil Chadwick at 9:35 AM No comments: 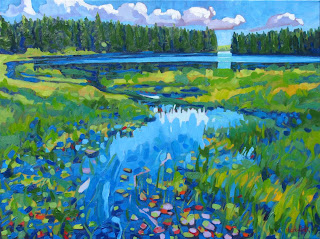 This is a mid afternoon view of the creek that leads into McCrae Lake. This view is looking southward with the onshore lake breeze shaping the cumulus clouds. There is only a breeze getting to the ground through the channel that leads to the west and McCrae Lake. This explains the ribbon of sky reflection in the otherwise mirror-like reflection of the scene in front of me. My goal was to have fun with the colours and the reflections.
Posted by The Art of Phil Chadwick at 11:50 AM No comments: 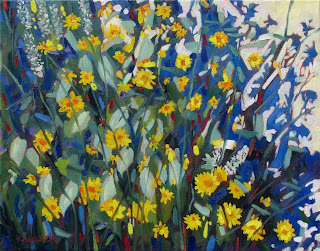 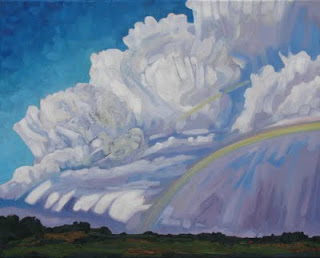 Around 4:30 pm on Tuesday afternoon. I watched this thunderstorm pass by to the northeast of Watershed Farm. There was enough wind shear to encourage supercells to develop although the stronger dynamics were over the Ottawa Valley. In fact a tornado did occur in Gatineau just across the Ontario Quebec border.
This particular cumulonimbus was still developing but there was evidence that there was already a separation of the up and down drafts. The forward flank downdraft and associated rain was producing a shallow arch single rainbow to the right. The shallow angle the rainbow made with the horizon revealed that sunset was still hours away - almost 4 hours in fact. There looked to be a bit of a shelf cloud toward the middle of the cloud base and I'm not sure if this was with the forward flank or rear flank downdraft. From the orientation of the shelf fingers, this shelf cloud is more likely to originate from the forward flank downdraft. The flanking line of the CB on the left edge of the painting is short and steep. This storm had a lot of development left to do.
This storm was destined to rumble along the Lake Ontario lake breeze. Apparently damage was reported near Peterborough and this could have been the cumulonimbus responsible.
Although there is no secondary rainbow in this view, the sky between the primary and secondary bows is noticeably darker than elsewhere. Alexander of Aphrodisias first described the effect in 200 AD and it now carries his name. Light rays undergoing a single reflection in raindrops form the primary rainbow or brighten the sky inside it. Rays reflected twice are deviated to form the secondary bow or brighten the sky outside. Raindrops along lines of sight between the two bows cannot send light to your eye and so the sky is darker there - a good explanation.
As I was painting this, I was thinking of Lawrence Nickle's reference to the Group of Seven's treatment of clouds as "boulders in the sky". This cumulonimbus was a boulder :>)
Posted by The Art of Phil Chadwick at 10:46 AM No comments:

The Son of the Fence 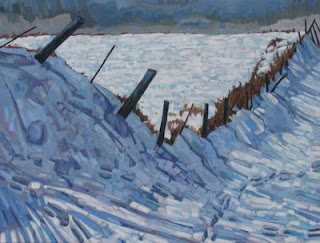 This is the cover of the "Weather of Ontario". It has gone to the printers and is expected to be on shelves by mid November although you can already pre-order at a discount on-line.
There is some new up-to-date science in the book and I want to thank the contributions of my friend and meteorological researcher Dave Sills. The folks at Lone Pine were terrific to work with and I look forward to seeing the final product. I am told they used a lot of my art. Most of the cloud images were selected from my library of cloud watching that spans the last 35 years. Some good friends filled in the weather image holes that I didn't have. There is even an image of the June 28th, 2009 F2 tornado included in the book at the last minute.
Posted by The Art of Phil Chadwick at 11:56 AM 1 comment: