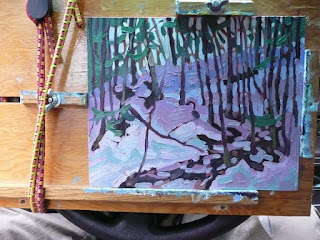 From 2009... The rain was continuous and cool. Plein air opportunities were going to be limited. I headed down an icy road south from Highway 60 looking for a place to paint the Oxtongue River. I was concerned that the Subaru would break through the ice crust that was about a foot thick above the bed of the road. There was certainly a lot of slush underneath the ice crust from all the rain. The storm that was foretold in the previous paintings with Lawrence Nickle, certainly developed. As a result I only took time to do this "out the window sketch" of the forest. This is the first time that I really used my steering wheel easel. It was fantastic. The temperature remained a steady and cool plus 8 Celsius throughout the painting. 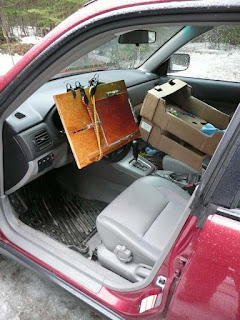 Posted by The Art of Phil Chadwick at 7:22 AM No comments: 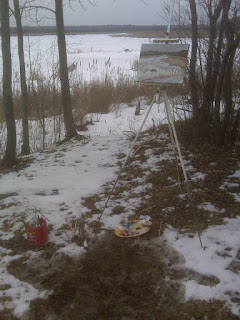 The ice was not safe. It was snow covered and even subtle currents in the “Back Pond” would be enough to make swimming holes. I didn’t venture out as I had forgotten my bathing suit which is what I would have needed. The muskrat “push-up” was a fair size indicating that the muskrats had been anticipating a long and cold winter. They were partly right although Thursday was mild with light southerly wind and temperatures to plus 7 Celsius. It was a pleasant day although the overcast altostratus blocked most of the heat from the sun. Another winter storm was on the way as well as a return to winter and blustery northwesterly winds in its wake. Until then, it was a nice day to be outside and bare handed, painting.

This view is looking northwesterly across the Back Pond at the Broome-Runciman Dam. The parking lot was littered with refuse  - too bad! I picked up most of it... 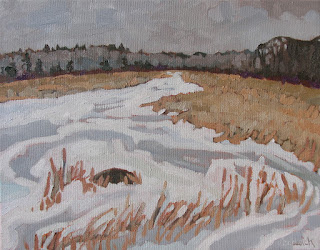 Posted by The Art of Phil Chadwick at 7:37 AM No comments: 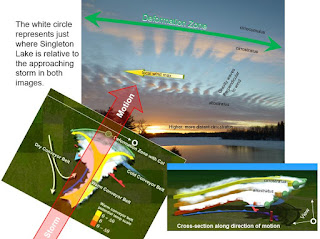 I thought that I should explain what I saw and painted... you can stop reading at any point when it becomes boring...

A winter storm was approaching Singleton Lake. The large arch of the deformation zone marched steadily from the western horizon. The warm conveyor belt must have been especially warm as it created a significant stable layer that in turn generated gravity wave clouds. Even though the storm was steadily advancing northeastward, the winds in the atmosphere frame of reference were perpendicular to the gravity waves. The clouds looked like a zipper, unzipping. I guess this was unusual enough for me to want to record this in oils. The night was fast approaching and it would soon be dark. I made a few notes so I could paint this on another day.

This is a very interesting deformation zone. I believe that the atmosphere relative winds were northwesterly perpendicular to the gravity waves. At the time I should have watched which way those clouds were moving. This means that the col of the deformation zone was thus further to the northwest. This has the implication that the thrust of the system would be over northeastern Ontario and not over Singleton Lake. The anticyclonic minimum was causing the deformation zone to curl anticyclonically. This diagnosis was also consistent with the thinner cloud layers in the warm conveyor belt of the approaching system.

The zipper pattern in the gravity waves was caused by a slight convergence in the system relative winds with the point of the zipper identifying the convergence line and slightly strong winds. The reverse is also true when the zipper is pointing upwind or upstream.

The setting sun was illuminating higher and more distant cirrostratus along the horizon. This is consistent with the katabatic or inactive nature of this warm front with less cloud along the leading upper edge. The setting sun was setting this cirrostratus on fire. This cloudy fire was reflected in the open water of Jim Day Rapids. The snow on the ice of Singleton Lake was not nearly as good a mirror as the calm water.

These are the kind of thoughts you can have when you have time to sit and reflect, so to speak, on the lessons that the clouds tell. The bottom line was that Singleton Lake was going to get into the warm sector of the approaching storm. A bit of a thaw was on the way. Meanwhile, northeastern Ontario would receive the brunt of the storm with freezing rain, snow and otherwise wintry weather. The cold front would come through in a day or two and bring winter back to Singleton - as it should be.

Note that the bands of cirrostratus convert to cirrocumulus on the opposite side of the deformation zone. It is a different air mass with a different characteristics on the other side of the deformation zone. The drier air was more unstable. Note also that in the atmosphere everything happens in waves at regular intervals. The meteorological processes are more of a ballet with everything in perfect balance. 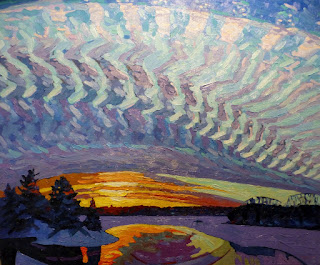 The title focuses on the idea that the sun was waving good night as it exited below the western horizon. The clouds are the only way that the atmosphere can communicate, so to speak. "Nite" is just an informal, simplified spelling of night and I wanted something different in order to keep my titles unique.
Posted by The Art of Phil Chadwick at 9:35 AM No comments: 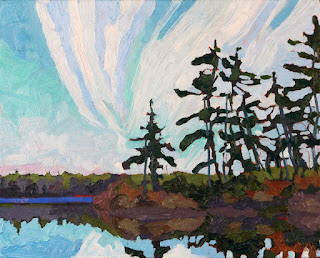 I paint a lot of sunrises and sunset. The light is best then. The shadows are long and the lighting unusual. It is the time to paint. But I needed to have a unique title for this painting and ol' Neil Diamond was playing at the time. September Morn was easily adjusted to December Morn which is only appropriate given climate change.

It was a rare December day to be kayaking but that is what I was doing. The cloud was spilling over the upper ridge in heavy sheets of cirrostratus. A system was on the way and the kayaking weather could not last. The cliffs of the south shore of Singleton Lake were impressive, even at this distance. The white pines on the point were very exposed to the winds which kept the gaps in the branches large enough to paint through.
Oils on burnt sienna oil tinted foundation on panel - 8 X 10 (inches). Started 4:00 pm Tuesday January 19th, 2016. The painting place was in the Singleton Studio out of the wind and the occasional heavy snow. The scene location was from my kayak on the morning of December 12th, 2015 in the southwest bay of Singleton Lake near N44.518097 W76.118637. looking southeast across the point of land which is very nearly cut-off to be another island on Singleton Lake.

Posted by The Art of Phil Chadwick at 7:10 AM No comments: