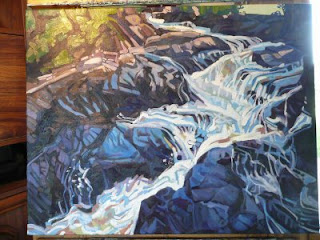 This is the view from partway up Ragged Falls looking upward toward the source of the torrent. I climbed up from the bottom of the falls looking for subject matter. There was so much of it. I didn't realize until I tried to climb out that Algonquin Park had erected great fences to keep people from going where I had climbed. Coming from the absolute bottom, I never encountered a fence until I tried to climb out. The falls are indeed ragged with many twists and turns among the torrent of water. The painting is not quite done... but you get the idea.
Posted by The Art of Phil Chadwick at 9:02 AM 1 comment: 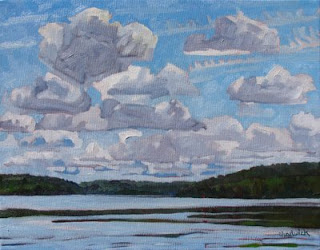 I still had hours until I had to be at the Algonquin Arts Centre Opening so I decided to check out the Smoke Lake boat ramp - it was a great decision. There were no bugs on the docks and I was able to paint in peace with a broad vista to the south. The cumulus clouds were well developed and were my main subjects. Jet stream cirrus and cirrostratus were streaming in from the west and heralding the approaching low pressure area and rain. This rain would come to pass as the deformation zone had pushed well to the north of Algonquin Park.
I started out painting on the floating dock but had to move to the shore due to the boat traffic in and out of the boat ramp. The dock bounced up and down and it was difficult to keep the brush on the canvas. Two young couples came by, admired my work and called me Tom Thomson - it was nice:>)
Posted by The Art of Phil Chadwick at 6:00 AM No comments: 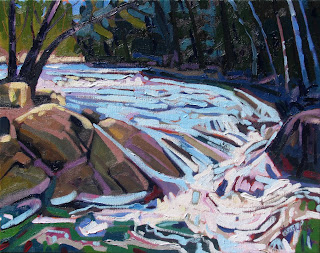 I left the pleasant company of Lawrence Nickle early at 7 am in the morning. He understood that I had another day to paint and that I had to have an early start.
I ended up perched on a rock just of the shore of the Oxtongue River - "outstanding on a rock" you might say. The GPS shows me on the west bank but I was clearly on a rock surrounded by water. The biting bugs of all descriptions were absolutley ferocious! I had to retreat after an hour of laying in shapes and colours. I would continue to flinch and scratch for bugs for days even though there were no longer any biting bugs around.
This is the view toward the north and upstream alog the Oxtongue River.
Oils on medium dark burnt sienna oil tinted foundation on commercial canvas - 11 X 14
Posted by The Art of Phil Chadwick at 7:17 PM No comments: 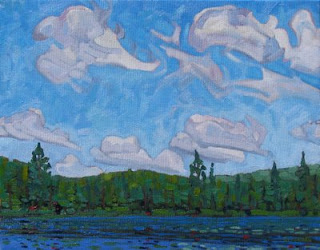 Daytime heating had taken over as the dominant force lifting the surface air parcels to saturation. The cumulus clouds were now more vertical and had flatter, more uniform bases. Lawrence aptly called this lifted condensation level the floor of the clouds. He also called the Group of Seven's treatment of clouds as painting boulders in the sky. There is much truth in his observation!
The title is after the name of the lake and also largely the condition of the sky. By noon, the bugs were not nearly so ferocious as they were first thing in the morning.
Oils on medium dark burnt sienna oil tinted foundation on commercial canvas - 11 X 14 (inches)
Posted by The Art of Phil Chadwick at 12:06 PM No comments: 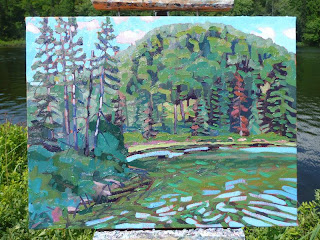 "Blue Sky Greens"
Lawrence Nickle guided me to yet another one of his favourite painting places along what he called the "10th Mill Road" of Jolly Township. The rainy weather never materialized. In the wake of the storm we had turbulent stratocumulus whipped up by a brisk easterly breeze that also tended to keep the small black flies at bay The larger deer flies could manage the wind though. The bases of the stratocumulus are indistinct which is consistent with the turbulent way of lifting the moisture to condensation.

Large bull frog tadpoles kept surfacing like those toy soda-powered submarines we played with as kids. There were also a lot of minnows in the shallows. Turtles nests had already been dug up along the sand and gravel lane. The skunks and raccoons were kept very busy trying to keep up with the turtles. Hopefully, lots of the eggs still survived.
Posted by The Art of Phil Chadwick at 6:00 AM 1 comment: This is 7 pm in the air conditioned auditorium of the Schomberg Arena. It should be fun.
Posted by The Art of Phil Chadwick at 5:39 PM No comments: 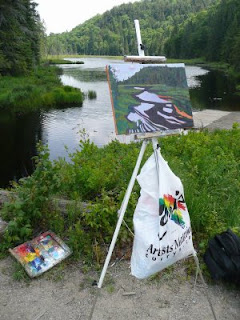 I spent the week painting with a great friend and artist Lawrence Nickle. I started this particular effort around 11 am while the trees were still in shadow and the wind in the valley was fitfully calm. The water surface was smooth and black during a lull in the breeze but was slightly rippled and reflected the sky whenever a fit of wind worked its way through the valley. The calm and flat surface relfected the dark trees of the far shore of the lake.
Oils on medium dark burnt sienna oil tinted foundation on commercial canvas - 11 X 14 (inches) Started 11 am Wednesday June 17th, 2009. Painting Place N45.73998 W79.06006.
Posted by The Art of Phil Chadwick at 2:58 PM No comments:

Tom Thomson Was A Weatherman - in Algonquin Park 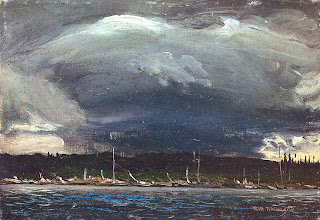 8 pm Monday July 6th at the Amplitheatre at 35.4 Kilometre in Algonquin Park

Here is the advertising going to the Algonquin campers and supporters...

"What inspired Tom Thomson, one of Canada’s greatest artists? Join Phil “The Forecaster” Chadwick as he tries to convince you that the weather was Thomson’s inspiration and that the proof is in the painting. "


Phil the Forecaster is a nuclear physicist turned meteorologist but has always been an artist. Phil Chadwick paints mostly "en plein air" in oils on canvas outside, surrounded by inspiration. Canoeing, birding, camping and bee keeping rounds out the passion that Phil has for life and the environment.


Phil has been building on this presentation from the early 1990's. Based on the work of Tom Thomson and the Group of Seven, it could last days - but this one won't :>)
Posted by The Art of Phil Chadwick at 8:31 AM No comments: 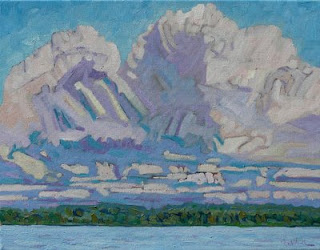 I have another article published about summer severe weather...

Monday, July 13 to Wednesday, July 15
Apparently we have a full class.
Posted by The Art of Phil Chadwick at 12:07 PM 2 comments:

Paint What You Know About...

My good friends at the Alognquin Art Centre are busy preparing for another season in Algonquin Park - at Kilometre 20 from the west gate. Plein Air art is featured this year and I am trying to be helpful. The following link leads to an article I wrote.

http://www.algonquinartcentre.com/_en/?q=node/25
Posted by The Art of Phil Chadwick at 10:22 AM No comments: