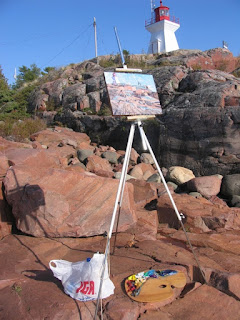 Monday, October 2nd, 2006
On Monday afternoon the group with the Southampton Art School Killarney Paint-out kind of scattered. I headed back to the lighthouse at the eastern end of Ontario Street. I set up looking upward and northeasterly at the Killarney Lighthouse. I stood just above the wave line. If this had been an ocean front lighthouse, I wouldn't have taken the chance standing so close to the water edge because of rogue waves.
The sound of the wind and the waves filled the air. I painted hard from 2 to just after 4 pm. There were so many rocks and shapes that I got lost several times in the details. 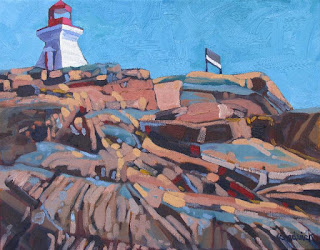 Posted by The Art of Phil Chadwick at 7:33 AM No comments:

Started Tuesday, October 3rd, 2006. There are a thousand paintings there left to be painted!
On Tuesday afternoon I headed back to the Chickanishing Creek Trail with "Margaritaville. It was an easy paddle out to Georgian Bay down the creek. The Chickanishing Creek Trail is about 8 kilometres north of Killarney just inside the southern boundary of Killarney Provincial Park.
I set up on the very edge of the water looking northerly toward the large island at the mouth of Chickanishing Creek. The surface wind was light easterly while the winds at cloud level were still westerly. Streets of cumulus cloud were developing over the land and then dissipating as they headed out over the cold waters of Georgian Bay. The winds had still not shifted around to the east. This occurred near the end of my afternoon painting session when the influence of the approaching surface trough made itself dominant. The trees on the shores of Georgian Bay are all "wind blown" and thus the name for this painting. 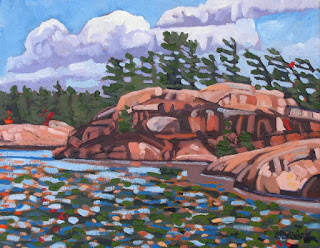 Posted by The Art of Phil Chadwick at 8:24 AM No comments: 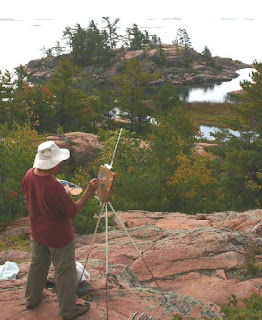 A blast from the past - Tuesday, October 3rd, 2006
On Tuesday morning the group with the Southampton Art School Killarney Paint-out headed to the Chickanishing Creek Trail. It is about 8 kilometres north of Killarney just inside the southern boundary of Killarney Provincial Park. All of the group set up just to the east of the parking lot. I walked the trail right to the cliff overlooking where Chickanishing Creek flows into Georgian Bay. The trail is really quite up and down but very beautiful with descriptive plagues along the way. There is a large sand deposit and an island at the end of the creek. The pines on the island are severely wind blown from the southwest. I painted looking southeast from a large flat granite slab just below the crest of the peak.
Several hikers stopped to take my picture as I painted. It was a fun morning. I had a close look at a male ruffed grouse on the way back to the parking lot. 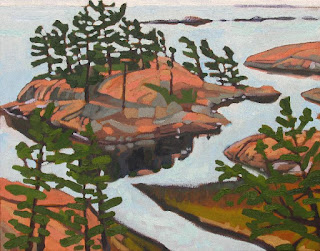 Posted by The Art of Phil Chadwick at 8:48 AM No comments: 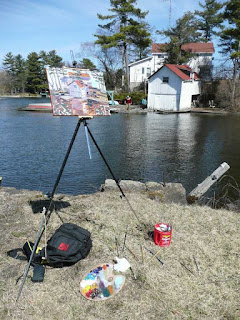 Started around 1 pm Tuesday April 15, 2008. Painting Place from the old River Road Bridge N44.50362 W75.80454.
I stopped at the old bridge where the "River Road" used to cross the mouth of Jones Creek. Apparently the construction crews feared they would never get to the bottom when they were carrying in rock for the bridge. This is township property but the local owner has used it now for a tomato garden. When she came over, she said she usually asked people to leave. I smiled and showed her my art. She made an exception for me. 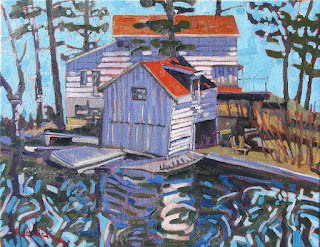 Posted by The Art of Phil Chadwick at 6:59 AM No comments: 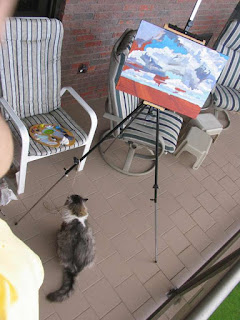 Started around 12:15 pm on Wednesday June 11, 2008.
And the clouds just keep on rolling. Starting just after high noon, I sketched the view to the northeast looking from the balcony of the condo at 55 Water Street East. The towering cumulus clouds are what caught my eye. They developed and moved off so quickly that what resulted in the painting is a composite of many different individual clouds. Thank goodness that the islands and terrain did not move as well. The condo Kitty seemed to approve.
At one time a bridge was planned to join Brockville with Morristown with the three islands, the Three Sisters providing the base for the towers supporting the spans. That never happened although there is some stone work on the closest of the islands. Traffic would have landed on the lawns of Fulford Place, however, and Senator Fulford managed to block completion of the project. Had it been completed, the history of the region would have been quite different. 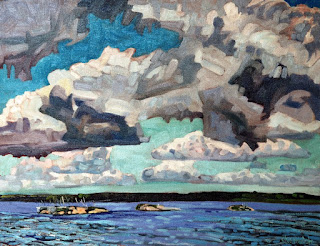 Posted by The Art of Phil Chadwick at 11:09 AM No comments: 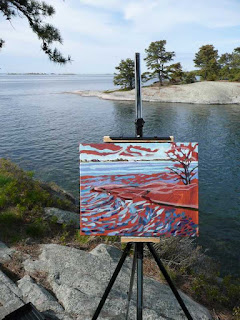 Started 8:30 am Monday May 12th, 2008. Painting Place at N44.50688 W75.78943.
This was painted from the southwest point of Green (A) Island overlooking the flat granite point of Savage Island. The sun was still getting up.
I was planning to paint from the other point but I noticed a Canada goose on a nest and I didn’t wish to disturb her. She (or he) got quite used to me after a while and we did not bother each other. The mate spent its time paddling around in front keeping an eye on me. The geese seemed to remember me and didn’t put up much of a fuss.
The osprey were still playing at there nest. Their call is more like that of a songbird and not a raptor!
The clouds on the southwestern horizon were thickening up from cirrostratus into the odd band of detached altostratus. A low pressure area was on the way and the northeasterlies up the river responded, The waves on the way back to shore were rather large with white caps. As a result the Savage sunrise was foretelling stormy weather on the way. It came to pass. 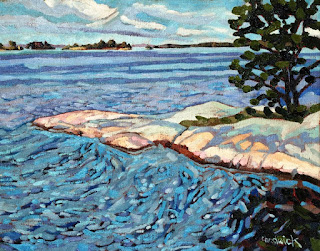 Posted by The Art of Phil Chadwick at 9:11 AM No comments: 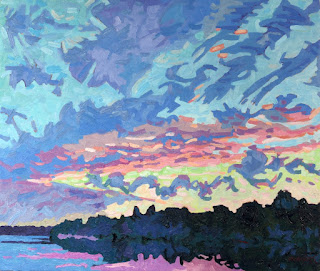 So far, we have a small group signed up for the FAB - Plein Air - Experience of August 7-8-9. That is fine by me. Plan A and Plan B are being finalized and will be communicated to the intrepid painters. Painting locations must have shelter and some basic facilities - as well as a good exposure for the morning and afternoon light with vistas to match. There are many such locations in the Frontenac Arch Biosphere but we only need three. The focus will be on painting and I will share the lessons learnt over the decades - as well as those I try to learn every day.
We will certainly talk about the weather - we will paint in it for sure. The attached painting is from one of the special locations that I know well.

Posted by The Art of Phil Chadwick at 10:02 AM No comments: 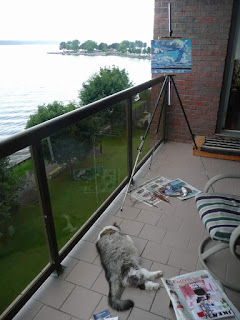 Started Sunday August 3rd, 2008.
It was 4 pm on the balcony at "The Executive" condo in Brockville. We were all enjoying the weather on a beautiful August afternoon.
A cumulus on the American shore shot up to a massive towering cumulus (TCU) in a matter of minutes and I grabbed a canvas and paints to have fun with it. With convective cloud, the shapes, patterns and colours change by the minute and I had to rush before the TCU started to shower out. This was only the first in a series of TCU's that produced showers for the rest of the day. Only one or two way to the east over New York State, ever made it to the cumulonimbus stage.
The "ICU" in the title could be one of two things. It was initially meant to be "I see you" but at times during the process of the painting, it could have meant "intensive care unit" as the survival of the sketch was in some doubt.
http://fineartamerica.com/featured/icu-tcu-phil-chadwick.html 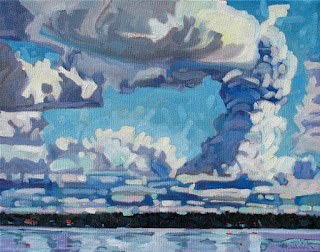 Posted by The Art of Phil Chadwick at 6:38 AM No comments: