The Weather Makers by Tim Flannery 2005 - What has happened in Fifteen Years? 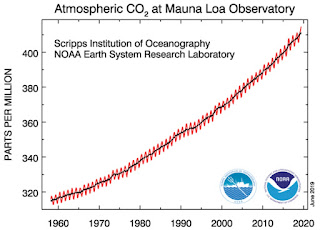 So how have things changed in the fifteen years since the release of The Weather Makers by Tim Flannery? Pictures are worth a thousand words – maybe a lot more. Here they are.

Greenhouse gas emissions climbed by 70 percent in the 34 years between 1970 and 2004. Atmospheric carbon dioxide concentrations rose by 1.8 percent between 2017 and 2018. The burning of fossil fuels for electricity, heat, and transportation has only increased since 2005 although the rate of increase is about steady near 2 percent a year.

Global temperatures have responded to the continuing increases in greenhouse gas concentrations. The temperature deviations from normal during the period from 2014 to 2018 are displayed in the accompanying depiction from NASA. The Arctic is warming much faster than the rest of the globe. The impacts on the jet stream because of the weakening of the temperature gradient between the equator and the poles are now being felt in the weather patterns. 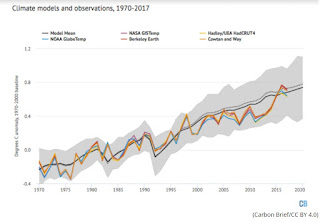 The resultant rise in global average temperature has been well predicted by complex computer simulations of the earth-atmosphere system that are increasingly inclusive of the physical processes at work. The science of climate change has improved dramatically.


The thawing of the permafrost is a runaway feedback mechanism that will release methane into the atmosphere. CH4 has 30 times more impact that CO2 but is not as persistent in the atmosphere. 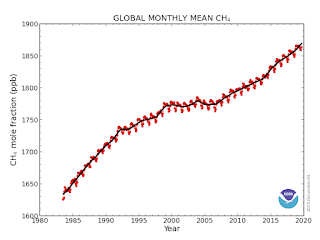 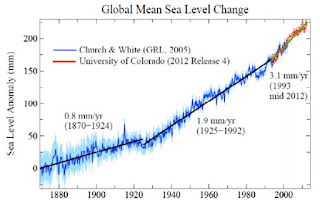 The global ice packs are melting at an accelerated rate as the globe warms. The melting of the Greenland ice sheet has finally caught the attention of the world. Greenland is losing ice seven times faster than it was in the 1990s. The Antarctic as a whole contains about 90 percent of the planet’s ice and is showing signs of an increased melt as well  Antarctic ice shelves that float on the Southern Ocean are eroding. The vast glaciers behind these shelves could accelerate their slide into the sea as happened in 2002 when the Larsen B ice shelf collapsed off the Antarctic Peninsula. The mean sea level must rise on a warmer globe due to thermal expansion and the melting of the planet’s ice. The rate of mean sea level rise is increasing. 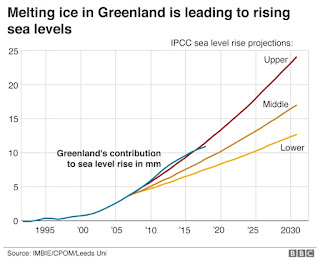 The melting on the Greenland ice will contribute 10 to 20 mm to the global mean sea level.

The effects of climate change as described in “The Weather Makers” are being observed. The surprise is the speed at which these changes and their impacts are occurring - way faster than it was ever believed to be possible. Incremental influences of climate change can be heard in the daily news. Record breaking daily weather gradually accumulates to become the new uninhabitable climate. Heat and not cold is the biggest threat to all species and not just humans. 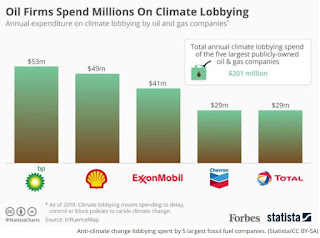 Although the science of climate change continues to improve, there are powerful and influential organizations that refute this knowledge. They are well-funded by corporations that profit from the burning of fossil fuels. These actions have escalated since 2005 and the publication of The Weather Makers.
Climate lobbying has been very effective as demonstrated by the inactions of most of the countries of the world. The rich and powerful have been polluting the atmosphere and oceans for profit. Simple greed. Their game plan is simple but successful. It was used with tobacco, asbestos, CFC's, car pollution, car safety belts... actually a very long list...

• Deny the existence of any problems.
• Pay charlatan scientists to lie and say their products or emissions are safe.
• Finance journals with official-sounding titles to publish bogus articles based on junk science.
• Buy the support or acquiescence of politicians and bureaucrats. 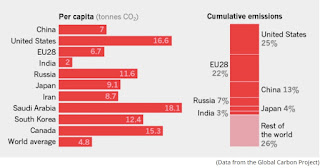 Canada still relies heavily on the extraction of fossil fuels and is the third highest per capita emitter of CO2 – three times the world average.

The Environmental Performance Index (EPI) offers an independent assessment at a national scale of how close countries are to established environmental policy goals. The EPI is a joint project of the Yale Center for Environmental Law & Policy and The Center for International Earth Science Information Network (CIESIN) at Columbia University’s Earth Institute. 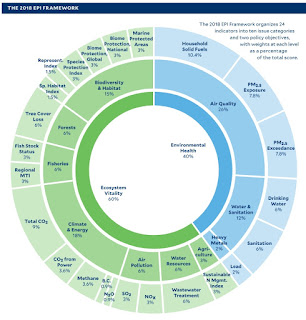 The EPI is produced in collaboration with the World Economic Forum (WEF). The EPI ranks 180 countries on 24 performance indicators across ten issue categories covering environmental health and ecosystem vitality. These metrics provide a scorecard that highlights leaders and laggards in environmental performance, gives insight on best practices, and provides guidance for countries that aspire to be leaders in sustainability. Canada ranks 25th in this list. 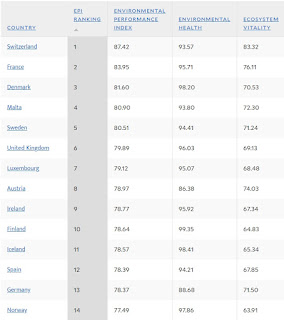 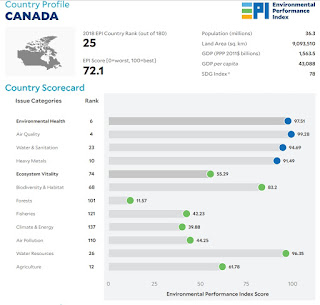 Not enough has changed since 2005. Canada needs to do much more. Political decisions in recent years have turned Canada in more of a laggard.  Canada still dumps raw sewage into our waterways and continues to dither ... the next generation will pay the price. Truly sad and unacceptable.
Posted by The Art of Phil Chadwick at 8:31 AM No comments: