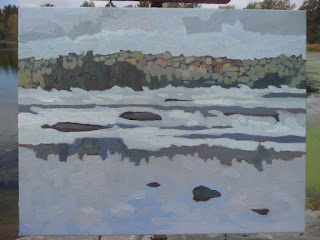 It was clear overnight with a beautiful full moon. The air was the coldest just at dawn and that was when the Arctic sea smoke really started to boil off the waters of Singleton Lake. I don't expect to be swimming anymore. Each wisp of Arctic sea smoke takes heat from the water. Banks of fog formed and soon it was completely overcast with stratus. Cool northeasterly drainage breezes kept the Arctic sea smoke churning until almost 11 am. I got a late start and the sky started to change before I wanted it to. By early afternoon the fog was gone and replaced with fair weather cumulus clouds - a beautiful day!
The geese provided the sound track again. The fall migrations has started.
Posted by The Art of Phil Chadwick at 6:38 AM No comments: 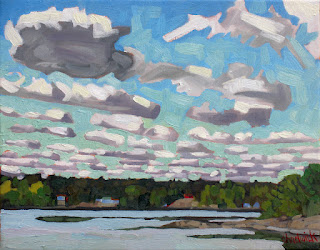 A cool Arctic air mass my be clear first thing in the morning but it will likely cloud over by midday morning especially on the first day following the cold front. The rain associated with the cold frontal passage provided the moisture which was still in the top layers of the ground. The September sun provides the heat to float hot air balloon parcels of air skyward. The air mass was convectively unstable especially in the low levels thus accelerating the air parcels upward on their way to become cloud droplets. The result was cumulus clouds with flat bases that were generally about the same height above the ground throughout the air mass. These clouds get organized into streets parallel to the average wind through the boundary layer. The distance between the cloud streets depends on the height of the boundary layer - both of these distances are about the same. My hands even got cool while I painted although the sun was pleasantly warm on my back!
Posted by The Art of Phil Chadwick at 2:55 PM No comments: 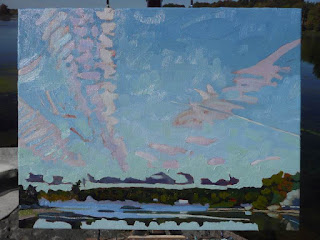 This title might be cryptic. For the three or four days after 911, air traffic was stopped over North America. Some brilliant and curious meteorologist investigated the impact of this on temperatures and sky cover. He discovered that the skies were much clearer with the direct effect that night time temperatures dropped on average three or four degrees below the averages established prior to 911. The infra red radiation from the ground at night was not intercepted by the jet contrails and returned to earth. Simply, the nights were clear and cooler with no air traffic.
As I continue to watch the skies, I continue to be dissapointed at how much cloud is man-made. Jet contrails account for a large percentage of the ice crystals in the upper atmosphere. What should be blue skies with a ridge of high pressure are almost always tainted by contrails spreading out with the winds aloft. The blue skies become transformed into overcast but really thin cirrostratus.
This view looking westward from the very shore of Singleton Lake is a typical ridge of high pressure. I think that all of the cirrus clouds in this painting are the results of jets flying in and out of Pearson and the other major airports of North America. There are three main contrails in this painting which also contributes to the title I picked. While I painted several jets left their mark in the sky. I included just one of these contrails coming from Europe and the north. The high contrail casts a shadow on the lower layer of cirrostratus.
The lower and much darker layer of stratocumulus on the western horizon is composed of large and old cloud droplets trapped under the radiational inversion at the top of the planetary boundary layer. Northerly winds just above this inversion created rolls in the cloud top.
The cold air at the ground created "Arctic steam fog" that pooled over the west basin of Singleton Lake and obscured the shore line. Heat and moisture from the lake comprised this fog - my swimming days are likely over for the year as the water cools down to downright chilly temperatures. My hands even got cold while I painted but the sun felt great on my back!
Migrating geese and feeding blue jays provided the fall sound track of this painting.
So if I am ever given the "third degree" on why I painted "Three Degrees", this will be my answer and I am sticking to it.
Posted by The Art of Phil Chadwick at 10:59 AM No comments: 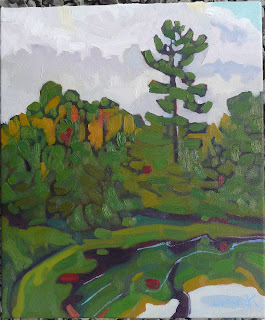 A group of three or four otters kept me company at the start. They poked their head and shoulders high out of the water like synchronized swimmers. They snorted a few times, bristled their whiskers and then continued down Long Reach. The otters had way more facial hair than the Olympic swimmers. It started to rain just as I was finishing up.
Oils on medium burnt sienna oil tinted foundation on commercial canvas - 12 X 10 (inches)
Posted by The Art of Phil Chadwick at 7:50 AM No comments: 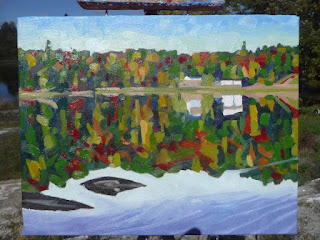 The water was a mirror at 7:30 am. The fall colours were becoming increasingly apparent with each passing day. The rising sun felt great on my back. It was a wonderful morning of painting! Light northwesterly winds developed as the land heated. Surface air parcels rose from the ground like hot air balloons to be replaced by air parcels from aloft - bringing the wind with them. The forecast was for fair weather cumulus based on this observation of wind. It is not rocket science..
Posted by The Art of Phil Chadwick at 12:01 PM No comments: 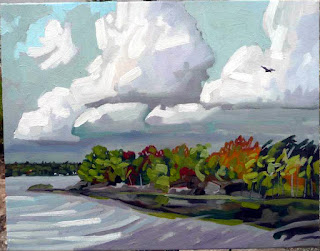 I try to do a September skyscape every year. The skies start to get increasingly interesting in September after the blue bird skies of summer. This is the 2012 effort. A band of rain passed through Singleton Lake in the morning along a trough line. The air mass remained convectively unstable and southwesterly streets of cumulus developed after a very brief period of clearing. It got progressively stormy and gusty as I painted. The gusty winds are a signature for an unstable air mass. Showers and towering cumulus clouds threatened several times but I was able to finish this before the cold frontal showers arrived.
A turkey vulture took a passing look at me and I stroked it in with the but end of my brush. It was gone in a second with the strong winds.
Posted by The Art of Phil Chadwick at 3:06 PM 1 comment: 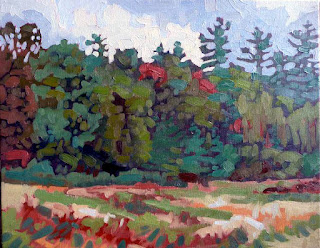 A wall of drizzle crossed the lake as I headed out to get my easel. The drizzle changed to rain so I set up my gear under the front porch. The view to the northeast across the field is spectacular. The fall colours were just starting but the real attraction for me continues to be the play of light through the holes in the trees - especially the white pines. The darker shapes in the sky are the nimbostratus cloud bases while the whiter swirls as the rain. The sky was starting to brighten as I finished up the painting. Wednesday morning September 26th.
Posted by The Art of Phil Chadwick at 10:37 AM 2 comments:

The Passion of Phil the Forecaster 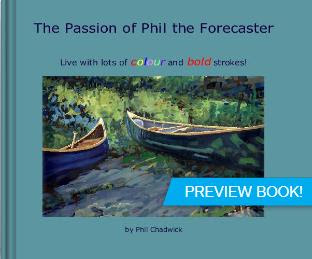 The art book was published this morning. I think it will be OK. It is harder than you might think. There is an e-book version as well for the iPod. Hard copies are not inexpensive but there are 120 pages on premium paper to consider.  Here is a snippet from the first page ...
"Write what you know about..." Mark TwainWell, there aren't that many words in this 120 page book so I guess I don't know much ... but there are lots of pictures and maybe they are worth thousands and thousands of words. This is one time it may be best for me to remain silent and let my art do the talking. Thanks for listening!    The "Tom Thomson Was A Weatherman" book is next... but I had better paint first and enjoy the beautiful fall weather.
Warmest regards, Phil
Posted by The Art of Phil Chadwick at 12:07 PM No comments:

Tom Thomson Was A Weatherman!
7 pm... I can prove it...
There is a book coming out as soon as I can get it done.

Posted by The Art of Phil Chadwick at 7:56 AM No comments: 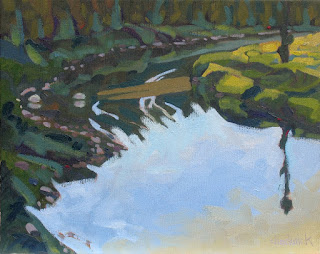 I was headed home from the Southampton Art School via Paisley. On my way I passed Access Point 14 to the Saugeen River and could not resist the morning light. Flocks of cackling blackbirds provided the sound track. Trout rising for insects provided some interest as well... I like the colour of the shaded white cedars that lined and protected the river banks.
Posted by The Art of Phil Chadwick at 3:04 PM No comments: 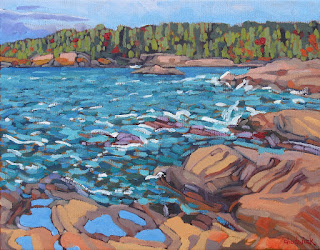 Killarney became one of my main painting destinations in 2006 ... and every October thereafter when the autumn colours are at their peak and the water is still warm and there are no biting insects. It is a magical area of red rock, trees and water. It is no wonder why the Group of Seven were so inspired by the natural beauty of the region. I know the Group of One continues to be inspired by the rugged nature and the equally rugged weather. It is worth the drive! "Wave Action" to above is a typcial scene that we will see. The image below, courtesy of Patrick Boerlin shows the kind of "work" we do en plein air in Killarney.
The food at the Killarney Mountain Lodge is simply amazing. The evenings around the circular fire place - sometimes with a live band - over a beverage or two - are incomparable. The Southampton Art School says we still have some room for others to join us. They try to keep the group size less than 10.... Link to Southampton Art School's Killarney. I hope you can come along! 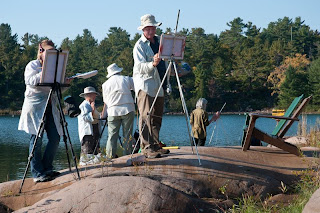 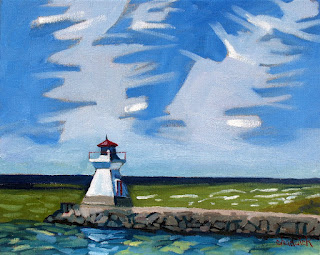 This is the view from the south shore of the Saugeen River across the river mouth toward the range light. The onshore winds were blustery and strong and I had to tie my easel down.Â  Some of the Southampton sand got into the paint. The cirrus clouds were very interesting. If the mariner lines up this light with the inland range light they are guaranteed a safe trip into the river...

This is the eighth demo piece for the “Making Waves on Chantry” course. They were on lunch break and I wasn’t. We have an excellent group of 11 participants! 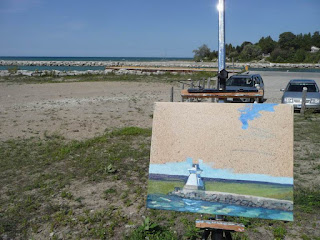 Posted by The Art of Phil Chadwick at 10:02 AM No comments: 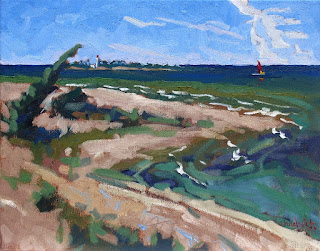 This is the view from the south shore of the Saugeen River across the sand dunes of the Southampton Shore toward Chantry Island. The onshore winds were blustery and strong and I had to tie my easel down. I wanted to demonstrate how to boldly go and paint a scene without fear. Some of that Southampton sand got into the paint.
This is the seventh demo piece for the “Making Waves on Chantry” course. They were on lunch break and I wasn’t. I didn't want to waste a minute with them. 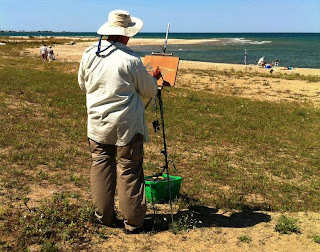 Posted by The Art of Phil Chadwick at 7:52 AM No comments: