2011 at the Chadwick Art House

Announcements... I will keep this brief...


Phil the Forecaster has officially retired... almost. His Retirement Bash originally scheduled for Ground Hog Day 2011 was appropriately rescheduled due to a blizzard. You gotta laugh! The February 15th Retirement is now his Valentine present to Linda even though it might not be exactly the perfect gift.


The Chadwick Art House has moved and now also produces 10 kWatts of solar energy. It has been a very busy fall and winter of construction but the paradise of Watershed Farm has indeed been recreated at Singleton Lake in eastern Ontario – Watershed Forests. If possible, it is even better than imagined and blends in with the environment. The property is now a forest and nature preserve providing habitat for lots of endangered species including artists. By late summer all of the work will be completed. Phil is now able to paint a lot more – watch the pig(ment)s fly now!


Here are the coming 2011 activities planned to date...


“Searching for Tom” in The Museum. I will present "Tom Thomson Was A Weatherman" at the Museum in Kitchener at 1:30 pm on Sunday March 27th. For full details ... click. It will be fun!


“Algonquin and Killarney in the Spring” ... a painting trip just because I now have time...


NOMEK – Meteorological Training in Finland, May


Forest” events. 2011 is the United Nation’s International Year of the Forest which is an international campaign to promote awareness of the importance of forests. For more details about the program, click. I will be participating and have already started to paint along this theme which has always been present in my art.


Spend two full days learning the fine point of painting water and everything surrounding it - the first day on Chantry Island - and day two from Southampton's shoreline. The prime themes in Phil's work are weather patterns and how they affect water and skies and he'll share his secrets of painting a great lake's great moods in this workshop. Plus we will have fun!


International Plein Air Painters 10th Great WORLDWIDE Paint Out September 9-10-11, 2011 ... For the first time in the Thousand Islands. Details to follow after they get decided.


Awenda Provincial Park, Awenda Provincial Park is located on Georgian Bay, 20 minutes northwest of Penetanguishene, Ontario. The Friends of Awenda sponsor an annual art and the environment event and I am participating on Saturday and Sunday September 17 and 18th, 2011- presentations of "Tom Thomson Was A Weatherman!". More details to follow as the date nears.


"Killarney Paint Escape" October 2-7, 2011. Escape to Group of Seven country and paint "en plein-air" with Phil the Forecaster. This Paint Escape is in tribute to my friend and fellow artist Jane Champagne.


“Weather of Ontario" - The book, published by Lone Pine is available in stores across Ontario if not across Canada. You can even find it in Canadian Tire! There is talk about doing an "Art and Weather" book based on my Tom Thomson presentations. It would be fun!


“Northern Light" - My Friend Roy MacGregor has published "Northern Light: The Enduring Mystery of Tom Thomson and the Woman Who Loved Him", Random House. It is the definitive Tom Thomson - Winnie Trainor text. Roy and I agree that there is not as much mystery as one might think - we are in complete agreement. Roy dug up the facts and by eliminating the half truths and lies - only the truth remains. It is a wonderful piece of Canadiana and an important part of our art and cultural history. Roy used some of my contributions. I am proud to be even a small part of this effort. Well done Roy!

Posted by The Art of Phil Chadwick at 6:39 PM 2 comments:

Singleton Phil continued the family profession but actually went to university and became a professional meteorologist with Environment Canada. His first career as a nuclear physicist was too much like living in his burrow so he opted for a career change and the fresh air outside the hole in the ground. His more famous relations took the media route and jumped into the forecast game without any academic training. 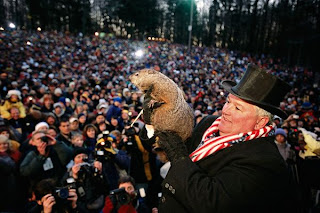 His Second Cousin in Punxsutawney, Pennsylvania is certainly the star of the clan and kept the family name. (Ground hog’s surnames are actually their first given name preceded by the location of their burrow.) Another cousin disowned the family and now lives in Wiarton. “Philly”, now known as “Willie” was the first of the clan who learnt how to cross the road after observing the success of some chickens. There are now furcasters scattered around North America. And that’s the truth... although most have had to change their names because of their media handlers - just like Marilyn Monroe. You might be surprised to learn that Buckeye Chuck, General Beauregard Lee, Staten Island Chuck, and Shubenacadie Sam are all cousins of Singleton Phil.

Cousin Phil in Pennsylvania's Punxsutawney emerged on Groundhog Day 2011 to make his 125th annual weather forecast to predict a shorter winter. Punxsutawney Phil, not being a trained meteorologist like Singleton Phil, still forecasts the old superstitious way based on his shadow. If Punxsy Phil sees his shadow on February 2nd, the Christian holiday of Candlemas, he feigns terror and runs back into his hole thus predicting a longer winter – more than six more weeks of cold. If Punxsy Phil doesn’t see his shadow, well he acts cool and does what he does best (continuing to eat which explains why he is overwweight) indicating that spring is right around the corner. The only natural reason that any ground hog would be leaving his cosy cavern in February at all is to find love in time for Valentine’s Day. The real reason that Punxsy bales from his bed on February 2nd is that his media bosses tell him that he must make an appearance for the masses. No appearance ... no caviar...

Before Wednesday, Punxsy Phil had seen his shadow 98 times and hadn't seen it 15 times since 1887. The media star and self proclaimed “Prognosticator of Prognosticators” claims an 85% accuracy but he doesn’t consider the spatial and temporal aspects of performance measurement so his verification is pretty much meaningless and biased. If one completes even the most rudimentary scientific verification of his actual skill, Punxsy Phil actually scores a pitiful 39%. That’s the glamour of the media though where flash can be more valuable than fact.


Singleton Phil, after 35 years with Environment Canada claims an 86% accuracy in both time and space. Whisker plots of the data using radar, satellite and lightning remote sensing data to supplement the human observations, places these numbers on a solid scientific footing. Agent Maxwell Smart would agree that 86 is more than a number pulled out of thin air. 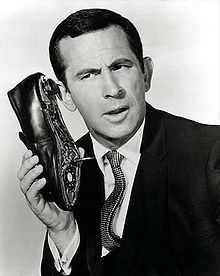 Singleton Phil sometimes wishes he had gone the high flying media route like Punxsy and Wiarton. The financial rewards with mass media are certainly greater but the quiet, family life of the scientific meteorologist ground hog on night shift still had its rewards. Now it’s time for Singleton Phil's real passion, painting the weather with his own hog’s hair brushes.
Posted by The Art of Phil Chadwick at 8:56 AM No comments: 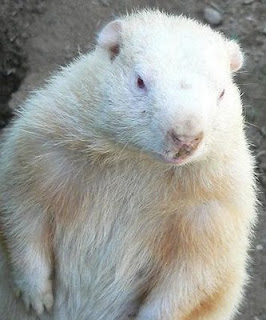 "Singleton Phil" did not see his shadow during the blizzard on February 2nd. As a result there are now only 10 more days left as an official Envirnoment Canada meteorologist. He will always be "Phil the Forecaster" but now the plein air paint is really going to fly! Notice that Singleton Phil and Phil the Forecaster go to the same barber and enjoy the same hair colour.
Posted by The Art of Phil Chadwick at 4:18 PM No comments:

Tom Thomson at the Museum

I will present "Tom Thomson Was A Weatherman" at the Museum in Kitchener at 1:30 pm on Sunday March 27th. For full details ... It will be fun!
Posted by The Art of Phil Chadwick at 4:10 PM No comments: