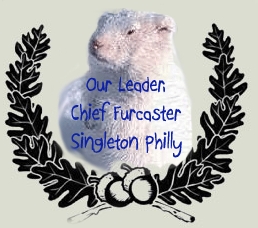 The answer is blowing in the wind... the jet stream is in the the typical ridge-trough pattern across Canada. Singleton remains in the cold trough in response to the warm ridge over the Rockies. Get used to it.

Weather I see my shadow or not is immaterial. The cold weather will continue through the spring. Computers worth a lot more than a Ground Hog Fur Coat have crunched the patterns. The Ground Hog inside that computer apparently only has access to a blue crayon. Cold... Get used to it especially over eastern Canada.

Singleton Philly never leaves the lake bit if he did, he would find that the equatorial Pacific has turned colder. Singleton Philly would diagnose that a weak La Niña (the blue crayon below the zero line to the right in the following graphic) has replaced the expected and aborted El Nino and expect it to continue until late spring... then La Nada with an inbetween ENSO pattern.

What does that mean for summer? Remember that climate change is real and that the Globe is really getting warmer. The computer ground hog was given yellow and orange crayons to colour the summer map (below). For Singleton, summer will indeed arrive and be near or warmer than normal... get used to it. 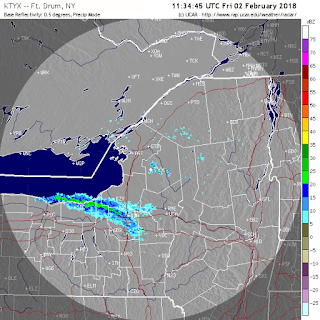 The cirrostratus from the storm over the east coast is not nearly thick enough to block the dawn over Singleton. The new satellite is giving some terrific Water Vapour data! 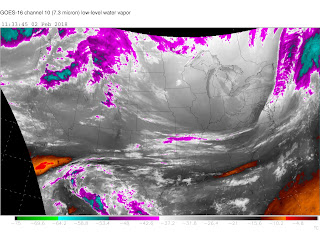 So aside from from some patchy turbulent stratocumulus and some thin cirrostratus, Singleton Philly could certainly find some sun shining through the breaks in the cloud and maybe even see a somewhat ghostly shadow.

Would such a shadow really scare Singleton Philly? Maybe because the ground hog in the computer says it is going to be a cold spring with six more weeks of winter weather anyway - just as the old saying goes when the scared Furcaster sees his shadows and scurries back into his hole in the ground.
Regardless what happens, you can't please everyone so Singleton Philly relies on the facts - just the scientific facts. And he can do all of this using remote sensing technology with a hot coffee in his paw. Remember what Singleton Philly always says: everyone wants to see a tornado before they die......... but not just before they die.

Posted by The Art of Phil Chadwick at 7:08 AM No comments: