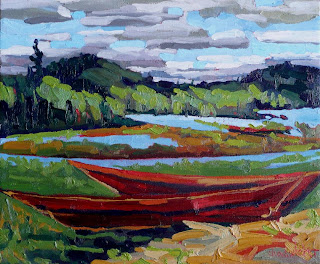 The next in the series of iconic Canadian art and how that inspiration might appear with the impacts of global warming. This is Tom Thomson's "Boats" from 1916. I have painted the same inspiration on a slightly different shape of canvas. The boats are now high and dry on green grass and the little water that remains is in the distance. Dropping water levels have already begun in the Great Lakes basin. Increased evapouration is the main cause for these drops. The rainfall is about the same or even a bit more but comes in intense but sporadic episodes that produce more run-off in between the longer droughts. The water doesn't stick around.
The title is fairly obvious with the positioning of the boats a long way from the water. The name also links to my favourite Canadian singer, Gordon Lightfoot and his song of the same name. I had fun...
Posted by The Art of Phil Chadwick at 10:05 AM 3 comments: 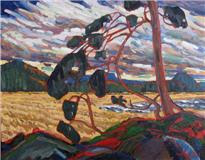 My version of “The West Wind” includes turbulent stratocumulus much the same as Tom’s but with a stronger wind. One of the characteristics of climate change is that storms will be more violent and energetic. Heat is fuel for these storms and there will be plenty of heat.

As well, the wind swept bay in “The West Wind” could even now be a marsh of cattails and grasses. In my version, the strong winds create waves in the grasses as the water levels are now lower and the marshes have moved in.

Water resources will certainly decline across most of North America with climate change. Evapouration will increase with increased temperatures and rainfall patterns will shift with the jet stream. The water levels of the Great Lakes have already started a serious decline.
Posted by The Art of Phil Chadwick at 5:07 PM No comments: 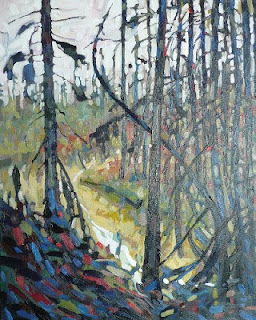 This is based on Tom Thomson’s “Northern River” which is a work he referred to as his swamp painting and one that wasn’t all that bad. Water resources will decline across most of North America with climate change. Evapouration will increase with increased temperatures and rainfall patterns will shift with the jet stream. The end result is that in many localities, rivers will decay into trickles. The ecosystem will change and the swamp won’t be a swamp any more.
This effort is for the Algonquin Art Centre 2010 show featuring the impacts of climate change.
Posted by The Art of Phil Chadwick at 9:55 AM No comments: