This is the second demo that I ever did in front of a class from Tuesday, May 30th, 2006  ... it was fun although I was always bouncing in and out of the zone. Verbal explanation takes over the left side of your brain while the visual creating half of your brain hangs out in the right side of your brain. I think I was able to connect though. There were some exceptional artists in this class.

This is looking west from the "Long Dock" Beach which is also the home of Gerry's Fries which is a local landmark. It was another sunny and hazy day. I discussed the land breeze transition to the lake breeze and how we could confirm that by watching for a line of cumulus forming near noon, parallel to but inland from the coast. I also described what I was doing and why during this demonstration painting. It was even a better day than the first one. They all seemed to have fun.

The "Short Dock" is parallel to but south of the "Long Dock". It was also shorter. Trains used to drive out on it to load and off load cargo. Today, the remaining structure of both the "Short Dock" and "Long Dock" are about a foot under the water.

The cold frontal cloud was not even visible on the western horizon. It was really quite hot and muggy and we were all sweating. 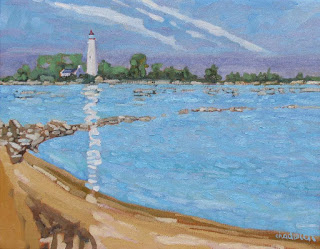 Posted by The Art of Phil Chadwick at 7:25 AM