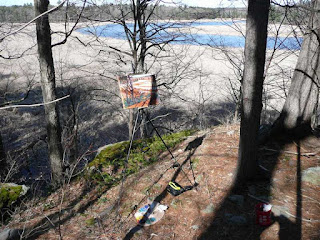 From Monday April 14, 2008...
I was standing on the edge of the limestone cliff overlooking Jones Creek. I went looking for the last remnants of snow to paint but found none. This view is looking northwestward across Jones Creek with some strong, dark trees in the foreground. The chilly northeasterly winds made me feel as though I was painting a snow scene.

The geese and red winged black birds were making their mating calls for spring. American mergansers were busy in the creek while ravens croaked in the distance. This is what spring is like at the Jones.

The shadow across the foreground is my easel and panel. It could have just as easily been a tree but it was me. This is in parody of Tom Thomson's painting "Algonquin Afternoon" where the art critics argue that Tom painted his shadow into the work. He may have. In my case, I am around to admit to this bit of self indulgence - the closet thing to a portrait that I am likely to do. 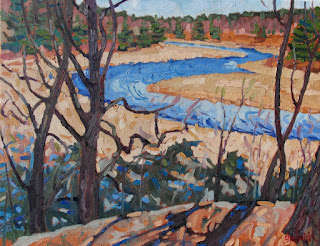 Posted by The Art of Phil Chadwick at 7:59 AM